adjective: relating to stone and gems and the work involved in engraving, cutting, or polishing.

noun: a person who cuts, polishes, or engraves gems.

A lapidary is an artist or artisan who forms stone, minerals, or gemstones into decorative items such as cabochons, engraved gems, and faceted designs. A lapidarist uses the lapidary techniques of cutting, grinding, and polishing. Hardstone carving requires specialized carving techniques.

Diamond cutters are generally not referred to as lapidaries, due to the specialized techniques which are required to work diamonds. In modern contexts, a gemcutter is a person who specializes in cutting diamonds, but in older historical contexts it refers to artists producing engraved gems such as jade carvings. By extension, the term lapidary has sometimes been applied to collectors of and dealers in gems, or to anyone who is knowledgeable in precious stones.[4]

The earliest known lapidary work likely occurred during the Stone Age.[1][7] As people created tools from stone, they inevitably realized that some geological materials were harder than others. The next earliest documented examples of what one may consider being lapidary arts came in the form of drilling stone and rock. The earliest roots of drilling rocks date back to approximately one million years ago.[8] 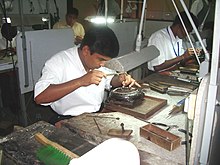 There are three broad categories of lapidary arts: tumbling, cabochon cutting, and faceting.

Most modern lapidary work is done using motorized equipment. Polishing is done with resin- or metal-bonded emery, silicon carbide (carborundum), aluminium oxide (corundum), or diamond dust in successively decreasing particle sizes until a polish is achieved. In older systems, the grinding and polishing powders were applied separately to the grinding or buffing wheel. Often, the final polish will use a different medium such as tin oxide or cerium(IV) oxide. Cutting of harder stones is done with a diamond-edged saw. For softer materials, a medium other than diamonds can be used, such as silicon carbide, garnet, emery, or corundum. Diamond cutting requires the use of diamond tools because of the extreme hardness of diamonds. The cutting, grinding, and polishing operations are usually lubricated with water, oil, or other liquids. Beyond these broader categories, there are other specialized forms of lapidary techniques, such as casting, carving, jewelry, and mosaics.[citation needed] 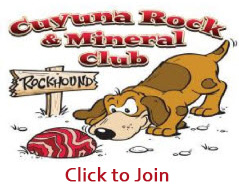 Our mission is to foster an interest and to encourage everyone to study earth science, enjoy the art of lapidary, and hunt for rocks and semi-precious stones.

We also strive to use what we know to further educate anyone who has an interest in our hobby.